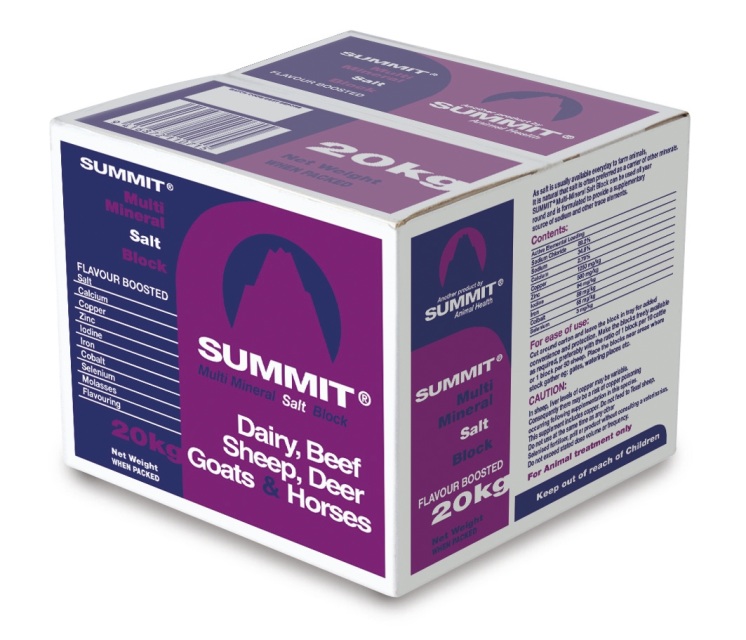 Why Salt Blocks?
Animals have sought salt since the beginning of time, gathering at salt licks to satisfy their need for salt. Many New Zealand soils and pastures are naturally low in available sodium, and the use of certain fertilisers, such as Potash, may accelerate the leaching process.

Sodium deficiencies are manifested as abnormal licking or chewing of wood, soil and sweat of other animals and may be accompanied by a decline in growth rates and/or milk production.

Common Salt (sodium chloride) is an essential constituent of animal diet. Because many New Zealand pastures are deficient in sodium some form of supplementation is often necessary. For instance, lactating cows need a daily minimum of 20gms of sodium chloride, dry cattle a minimum of 10gms and sheep a minimum of 2gms.

Sodium is routinely expelled from the body in milk, urine, faeces, sweat and saliva. Sodium should be available to farm animals every day and because of this, is a convenient carrier of other minerals.

Salt may be one of the most cost effective methods of increasing production.
Elements:
New Zealand dairy cows grazing pasture are most susceptible to deficiencies of cobalt, copper, iodine, and selenium.
Zinc supplementation is also important for immunity and hoof health.
Trace mineral deficiencies may induce problems such as abortions, retained placentas, mastitis, and infertility.
Summit Salt – No.1 Choice Throughout New Zealand
Copyright © 2017